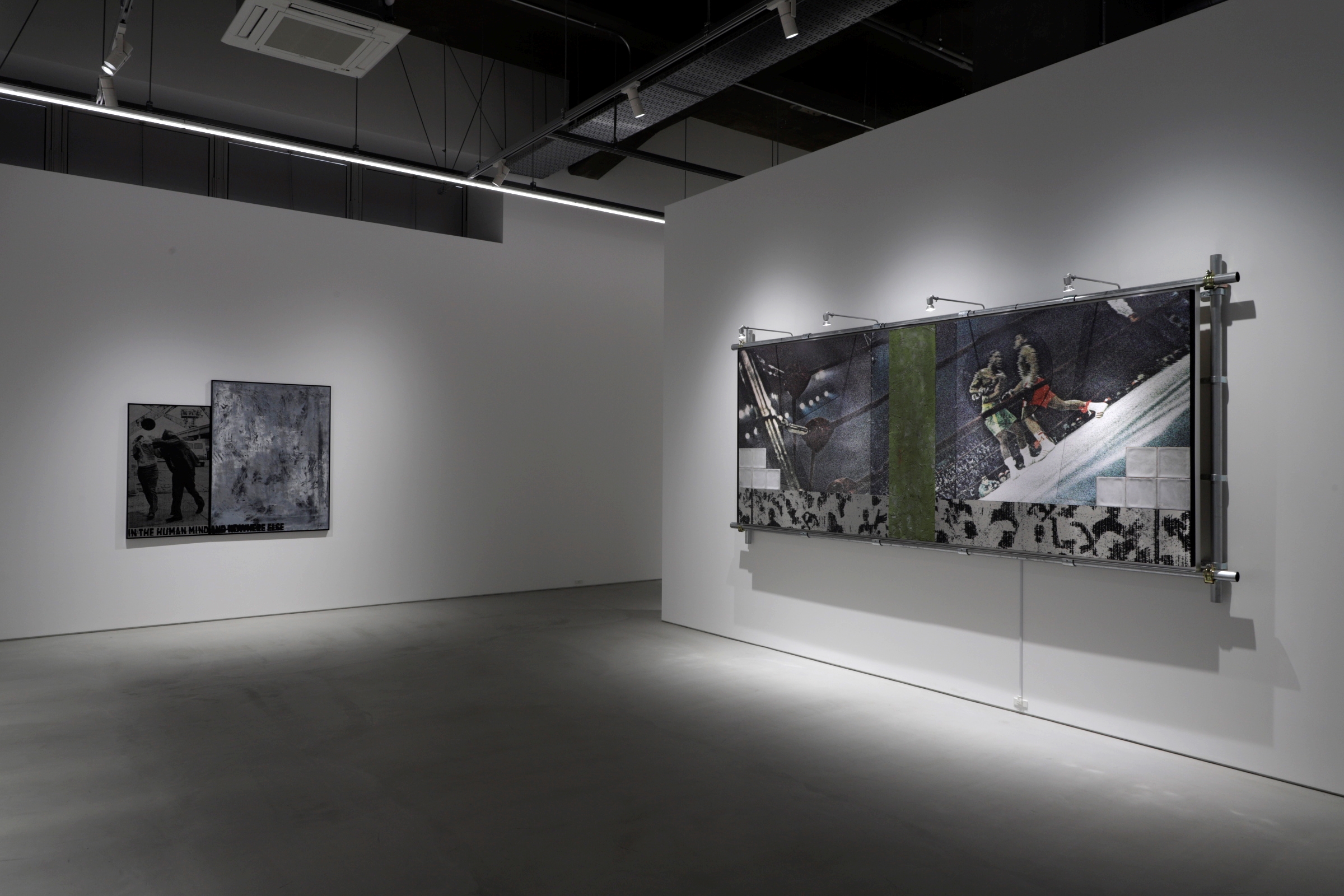 YUKIKOMIZUTANI is pleased to present a solo exhibition by Yabiku Henrique Yudi, from March 4 (Fri.) to April 9 (Sat.), 2022. A year after Yabiku presented collage as his prime method of expression at MOTION, DIESEL ART GALLERY, this extensive solo exhibition is titled AFTERTHOUGHT; translating to ‘reflection’ or ‘revision.’ Yabiku’s collage works led by intuition can be defined in twofold; perceptibility and playfulness come first, meaning and subject matter follows after. In this exhibition, Yabiku’s latest works comprise of collages using metal sheets and ceramic tiles, based on this twofold awareness. A wide array of signature collages mixing paper and paint indicative of his expansive scope of collage will be shown.

Feeling a series of disjointed thoughts overlapping by coincidence.

We are set adrift into a mysterious world, through the layers of intertwining time and space. Polarized junctures in time and materials are reborn through my intuition.

At a moment’s whim, it appears as an imaginary world on canvas.

Regardless of the despondence or elevation of my spirit, the day-to-day natural world appears through me, as if what appears before me is not a manifestation by my own will.

I am made anonymous, whilst the world that I perceive and appear in revolves.

Collage is a technique in which different materials are cut and pasted together to form an artwork. From ready-made objects to used magazines, Yabiku removes different materials from their original context, refashioning them as components in his art to illustrate unexpected discoveries. The title of this exhibition, “AFTERTHOUGHT”, refers to the artist’s perception during the process of combining different materials, as well as his realizations once the collage is complete.

Yabiku describes the happenings in the process of his creation as “clashings”. At the dawn of the digital age, Yabiku moved from his hometown of Sao Paulo, Brazil to Japan. The multi-ethnic country of Brazil is widespread with cultural conflicts between different races and classes, whilst Japan, a technologically advanced country, also saw its own traditions and values clashing between new and old. His experiences from childhood in the two countries are reflected in his current collages. The series of interrelated collages brings to mind the vibrant city of Sao Paulo, with its communidade (impoverished) and elite intertwined to make a distinct cultural ecosystem.

Inspired by billboards, Last Minute (mixed media, 3500 x 1500 x 50 mm, 2022) is a symbol of the “clashings” that Yabiku presents. The boxer standing in the ring is taken from a magazine printed more than 50 years ago. Cut-out from its context, the image is stripped from its connotations, disorienting the viewer. This is further enhanced with 2.5D printing, where grain and noise are visually amplified. Materials of varying textures, such as aluminum plates and ceramic tiles are fused to form a “billboard”. In contrast to the billboards, we see in our daily lives, Yabiku’s “billboard” has an illuminating presence distinct from conventional design. In Yabiku’s collages, where the theme of “clashings” is central to his works, the surprising happening which plays out between materials may bring about unexpected realizations in the shape of an “AFTERTHOUGHT”.

Born in 1997, São Paulo, Brazil, Yabiku moved to Japan at the age of 11. He studied fashion design at Bunka Fashion College, Tokyo, and later began making collage as a way of self-expression from 2017. His debut solo exhibition “FIRST IMPRESSION” was held in 2019 at the W+K+ Gallery. In the same year, Yabiku’s artwork in collaboration with Valentino was published in Them magazine. This year, 2022, he will hold his greatest solo exhibition “AFTERTHOUGHT” at YUKIKOMIZUTANI Gallery. His work challenges the viewers tendency in seeking binary narratives of love and hate, order and chaos, beauty and distort. By combining graphic images and real-world material (metals found in the street and industrial spaces, initially distant from the sphere of art), he obscures the line between artwork and consumer good, entertainment and utility, greater meaning and operative function. With a unique style of expression led by intuition, he is taking Tokyo’s Art and Fashion scene by storm. Yabiku is currently expanding the scope of his expression to include object creation and spatial installation, in addition to collage.